Home admission essay service How lowry develops the theme of

How lowry develops the theme of

This aspect of emotion is severely restricted in the Giver community due to the choices all being made for the people by their ancestors and Committee of Elders.

Jonas realizes that anger is not what Lily felt, merely shallow impatience and exasperation. Positive emotions can reward our existence and negative emotions can warn us against things we dislike.

Being a receiver of memory It is science fiction, with a theme of the past and connection. The novel encourages readers to celebrate differences instead of disparaging them or pretending they do not exist.

Ultimately, The Giver shows that the line between utopia and dystopia may be thin, since a lack of moderation in values such as security often results in the curbing of liberty and the rejection of wisdom. The society is safe, there are few premature deaths, Jonas's family seems to be loving and supportive, and Jonas has learned to value sharing, equality, and honesty, among other virtues.

From a moral standpoint, this is completely and absolutely absurd as human life is one of, if not the most precious things in the world. The punishment appears overly harsh and adds to the community's dystopian aura. 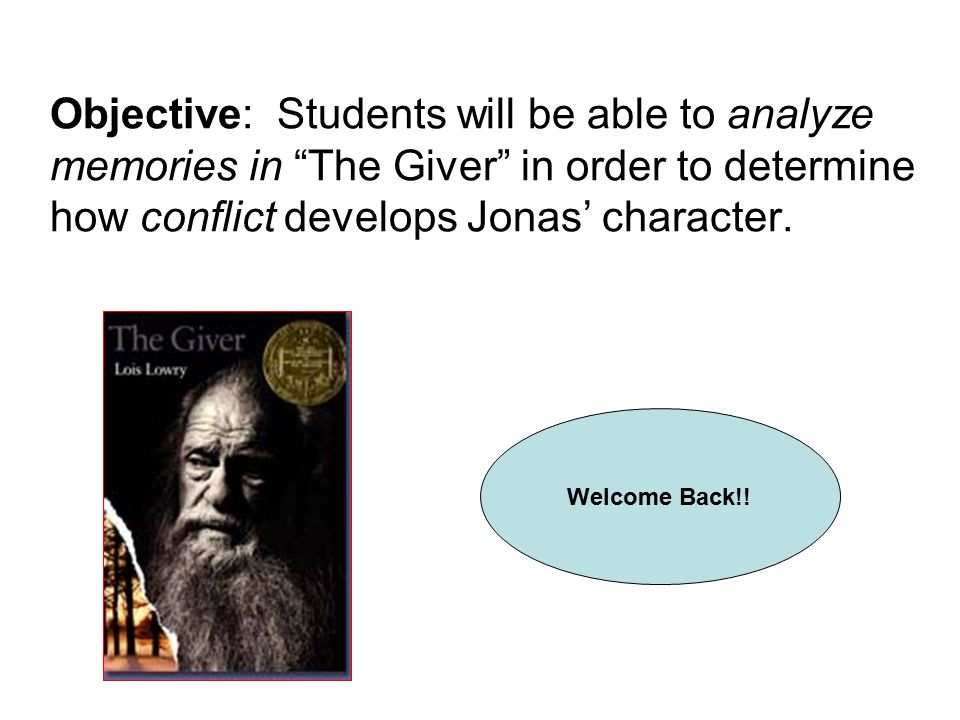 Utopia and dystopia As with many societies that ultimately end up as dystopias in literature, Jonas's community initially appears designed to be a utopia. If she had followed her feelings of fear, she could have chosen not to do the job and thus avoided her eventual release and death.

It is an essential part of life that is severely compromised in the Giver community illustrated by Lois Lowry. Until Jonas founds out that there are more then this community when he got his unique job assigned at the age of Emotion allows people to fully appreciate life.

The importance of memory in the giver

Themes are the fundamental and often universal ideas explored in a literary work. The loneliness forces Jonas to view his community from a more critical standpoint as he begins to see the weaknesses in the system. The concept is continually and mysteriously mentioned without sufficient explanation until nearly the end of the novel. The novel can even be seen as an allegory for this process of maturation: twelve-year-old Jonas rejects a society where everyone is the same to follow his own path. Yet, by the end of the novel, Jonas has learned to embrace the full range of human emotion, including to an extent the negative ones, and he allows his emotions and instinct to inform his actions. Jonas finds the latter category of killings to be the most offensive of all because they truncate entire lives. At some point in the past the community in The Giver decided to eliminate all pain from their lives. Lowry was inspired to write The Giver after a visit to her aging father, who had lost most of his long-term memory. She realized that without memory, there is no pain—if you cannot remember physical pain, you might as well not have experienced it, and you cannot be plagued by regret or grief if you cannot remember the events that hurt you. The Giver portrays what might today be called an extreme kind of "sustainable" society, one in stasis that can neither draw lessons from its mistakes nor remember its mistakes to prevent future ones, especially without the aid of The Receiver. The Giver community has removed pain from the lives of its residents and has taken away from one of the core values of life. Their lives are hollow and meaningless; monotonous and devoid of any form of emotional variation. The science fiction novel The Giver by Lois Lowry is about the protagonist, Jonas, who experiences the peaks and valleys life through the memories he receives from the Giver. It is science fiction, with a theme of the past and connection. Meanwhile, the lack of memories held by the rest of the community prevents them from adjusting their own destinies wisely, so they remain terrified of change and are forced to remain in a static, stagnant existence.
Rated 9/10 based on 38 review
Download
SparkNotes: The Giver: Themes